One of my best friends, Laura, had her first baby on March 8th!! We are all so excited and Jason and I got the chance to go up and visit the proud momma and tiny baby last Sunday on March 20th.

Eliza is soooo precious -- and soooo small!! I guess because my sister grows 'em big (and I know I will too), this little 6 lb baby just seemed soooo tiny. She slept pretty much the entire time we were there -- which was close to 4 hours! Laura says she sleeps during the day, then is awake at night. Next time I visit, I'll have to go at night when I can play with Eliza and Laura can get some sleep. ;-)

Isn't my husband so precious holding a baby? :-) 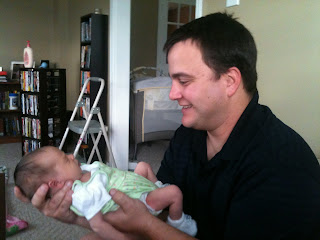 Posted by Holli Greene at 1:50 PM No comments: 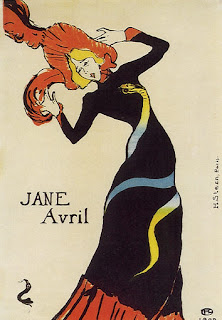 For my dad's birthday back in Decemeber, I got he and I a dual membership for the High Museum of Art in Atlanta. We had this membership years ago when I lived in Atlanta, but let it lapse when Jason and I moved to Birmingham. A love of art is something that my dad and I share and really enjoy together, so I decided to do this as a big surprise for him!

Well, the current big exhibit at the High is the Toulouse-Lautrec exhibit. They were having a members-only reception last night that was French themed with the viewing of the exhibit, French food, and a French movie. Coincidentally, Jason and his dad left yesterday for a long weekend in Savannah at a model train show. Hopefully he can update more about that.

It was perfect! The exhibit was amazing, the movie was funny and entertaining, and it was great to spend some quality time with my dad!! :-) We were so hungry that we left the movie early, so we'll have to rent it on Netflix (they have it -- I already checked!). It is called "Home" and it's a 2008 French movie about a family who lives on an abandoned highway that gets reopened and how they deal with it. We were also able to find a cute little Italian restaurant with all fresh food and it was also really good! :-) 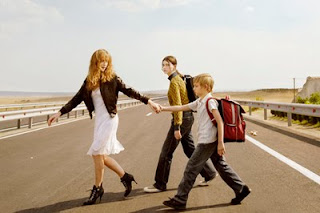 Posted by Holli Greene at 12:36 PM No comments:

So, as promised, here is a blog about house hunting. :-)

Jason's mom is a real estate agent, so she's been sending us things for a while casually just so we'd get a feel for what was out there in our price range and try to start deciding what we wanted and what was really important to us.

Jason and his mom started casually looking at house back in January while I was still in Augusta. They started to get an even better feel for what we needed and started narrowing down some areas and house types.

Originally we were looking in the Lawrenceville/Suwanee area to stay as close as possible to all our family and church. Many of the lovely houses that kept popping up were more in the Dacula/Auburn area. I believe this area saw a lot of growth right before the housing market took a dive -- so a lot of newer, nice homes are recently in foreclosure. Originally we thought this area was "too far out." However, when I got my job job in Athens a few weeks ago, we decided that Auburn/Dacula might be just perfect. :-)

Well, after both me and Jason went out with Karen a few times in March, we found a house we really like and made an offer on Sunday!! It's in Auburn off Fence Road and Auburn Road (Hwy 324) if you know where that is. It's a 4 bedroom/2.5 bath with a full unfinished basement. It is a foreclosure and will need some work, but my brother has already looked at it and it's nothing that we can't do or easily get him to do.

Well, we heard back from the real estate agent representing the bank yesterday, and they're going to negotiate with our offer!! We should get something formal in writting either today or Monday. I will update as we know more -- and as I get some pictures off Jason's camera so that I can add them to the blog as well! :-)

Your continued prayers and support are always appreciated! :-)
Posted by Holli Greene at 7:16 AM No comments:

Since it has been an entire year since I last posted (BAD Holli!!), there is no way I can do the last year justice with how crazy it has been. I want to get better at blogging, so all I can do is start from here and go foward. I will just quickly summarize the last year, and then start my new posts going forward.

- Holli lost her job in March 2010 in Birmingham.
- Jason graduated from UAB in May 2010
- Jason and Holli made a big life decision to move back to the Atlanta area to be near to family and find jobs there rather than move toward job offers.
- Holli and Jason moved in with Holli's dad in Lawrenceville, where they still live.
- Holli found a new job with MACTEC engineering in May 2010 and started in June 2010 at a nuclear power plant south of Augusta working fulltime for MACTEC.
- Jason worked odd jobs and then went on salary in October 2010 working for our brother-in-law Kevin Boeckman at Reach Technologies in Gainesville. Jason drives a delivery van delivering, repairing and selling toner (and other office supplies).
- Holli was working 70 hours a week at the plant (making good OT!), but completely miserable otherwise. Holli and Jason only saw each other a couple of times a month, Holli got no sleep, etc. So, when her former employer called her to come back to work at Geo-Hydro, she jumped at it!
- Holli started at Geo-Hydro in their Athens office in March 2011 and is LOVING it!!
- Holli and Jason have saved up 20% downpayment for a house and are anxiously looking to move into their first house together. More about this in a later post.

Love to all! Thanks for all your prayers and love during this very difficult year for the Greenes.
Posted by Holli Greene at 1:56 PM 1 comment: